Skip to content
This is a story about teaching, about reading, and about epistemology. I taught Calvino’s Mr Palomar last week, which is a lovely collection of reflective vignettes told from the perspective of a very analytical, slightly uptight man. It has no plot. It’s just a series of moments where Mr Palomar encounters the world:  physically, as in looking at waves on the beach; socially, as when he’s buying cheese in a Paris cheese shop; and reflectively, where he tries to make sense of his place in the world.
In the chapter entitled “Serpents and Skulls,” Mr Palomar is visiting Mexico, and touring the Aztec ruins at Tula. He is traveling with a friend who is well-versed in Aztec lore and clearly knows this site. He leads Palomar through a temple, and he “pauses at each stone, transforms it in to a cosmic tale, and allegory, a moral reflection” (96).
Mr Palomar listens rapt, but is occasionally distracted by a school group of children whose teacher keeps pointing to artifacts and describing them, but concluding each description with “We don’t know what it means” (97). Mr Palomar is torn between these two approaches to the world, and my class was inspired to wrestle with them as points on a spectrum.
To discuss them easily, I ascribed names to the speakers. The tour guide, leading a field trip in Mexico, I named Sergio. Then, feeling silly, and thinking perhaps that might be perceived as a goofy name for a Mexican teacher, I doubled down on my dorkiness: and because Palomar’s friend’s impassioned speech was on the left page of my open book, I named him Lefty. This is the kind of randomness or serendipity (depending on your attitude) that I think characterizes my classes. It also contributes to making each class its own culture. I have different students each time, but I also read differently each time. Ten years of Mr Palomar now, and there’s never been a “Ballad of Lefty and Sergio” before.
These two characters represent two approaches to the world and two ways of knowing (there’s the epistemology, as threatened).  Lefty is the conscientious teacher, who does all his homework and prepares for class, and when he gets in front of his students, he weaves a tapestry of what amounts to “scholarship’s best guesses.”  Knowing the cultural, anthropological, and literary history, he ties elements together and presents a working narrative that tries to do justice to the facts we can prove as well as to the truths of human nature (which are harder to prove, but no less real). He makes meaning.
As a medievalist, I’m very sympathetic to Lefty. It’s my job to teach works whose authors have been dead for centuries, frequently works whose authors are completely unknown.  I teach language no one has spoken for 600 years, and I do that, too, by a series of well-intentioned best guesses. If we know what Old English looked like, and we know what Modern English looks like, we can triangulate and make what feels like a valiant effort at understanding Middle English, the transition period.
But there’s no ironclad evidence.  When all is said and done, Sergio’s nihilistic approach that “We don’t know” is true, of course. Maybe it’s the difference between making meaning and making facts. My job is to look at as many external facts as I can, as Lefty does, and then to look at the most important fact—the text, for Lefty the statuary—and from those, produce a faithful reading.
Sergio is right: there is no empirical truth we can find, separated as we are from the works in space and time, but Lefty is right too. The solution is not to throw up our hands and deny any understanding. The solution is to pay attention to where we are standing, as we view as earnestly as we can and bridge the gap between art and audience.
I promise the last two weeks of poetry is not the beginning of a trend, but I couldn’t resist.  If you sing it, the meter can be smoothed out.
“The Ballad of Lefty and Sergio” 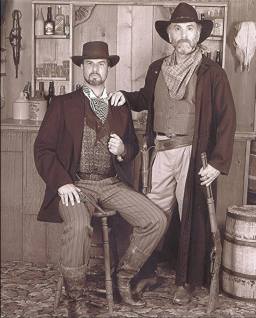 Lefty looks at all the facts;
He tirelessly prepares for class–
Reading, writing, watching, and then he
Constructs the truest story he can see.
Sergio won’t trust his eyes;
He sees this world compound of lies.
It’s foolish to presume that he can know
Anything outside of Sergio.
“I think this! It might be right.
The data speaks to me at night.
It makes sense given everything we know…
Why can’t you just imagine, Sergio?”
“It’s too far gone; we’re too far out.
We have no first person account.
You’re saying more about yourself, you see,
Than anything you’re looking at, Lefty.”

Sergio knows Lefty can’t help but deceive.
These guys will keep arguing long after this song,
But thinking one of them is right is surely wrong.

*Photo credit to Bob Lamb, for “Two Gun Bob and Gentleman Kip” who live again as Lefty and Sergio.  🙂  Thanks, Bob!