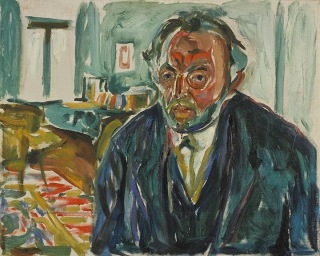 My family and I recently saw an exhibition of Edvard Munch’s work at the San Francisco Museum of Modern Art.  You know Munch, even if you’re not an art lover.  He painted The Scream, which you’ve seen parodied so many ways you might not even recognize the original.  In case it doesn’t leap immediately to your mind’s eye, I present something like the original on a tee shirt, and two parodies to jog your memory. 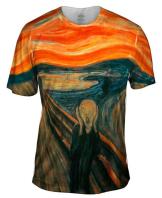 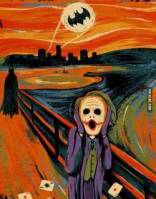 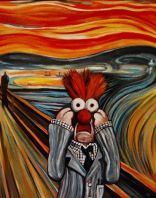 So that guy.  I always thought he was so dark and creepy, I didn’t really like him. I am quite a sunshiny optimist, really. But an exhibition is a funny thing—it presents a scope of a person’s life like a biography or a long night of storytelling—and by the time I left, I was a hardcore Munch fan. 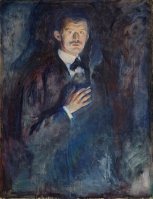 The first thing I saw was a room full of self-portraits, which was brilliant on the curator’s part, because there’s nothing so personal and public at the same time as a self-portrait. Several of them at once create a flow of time, of stages in a life, in a way that makes one feel like you’ve known this guy forever. You have a sense of who this guy was. He was young; he was middle-aged; he grew old.

Once you’ve seen the artist through his own eyes, you’re ready to see the rest. What the portraits taught me was how he became the creator of The Scream. There were paintings of sick beds (he lost his sister and mother to tuberculosis when he was young) and paintings of houses with lurid skies. You could feel them almost as much as you could see them. The blurbs telling us of his traumatic loss and battles with mental and physical illnesses were almost superfluous.

I came away from this experience thinking my assessment of Munch as dark and creepy had been woefully hasty and superficial. Instead, I was struck by the fact that he was just a man, struggling to live his life like anyone else. I felt his humanity. In the fishbowl of an exhibition, surrounded by images of Munch’s difficult life, I was deeply moved by his fervor to document it—to strip it down to its raw, real elements, and convey them to others. And I got it, man. I felt. Sometimes it was horrible; sometimes it was heartbreaking, but he kept painting. There is heroism in that. 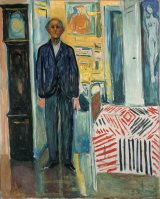 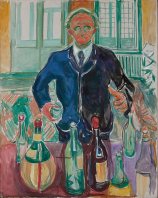 And in the struggle to tell his story, there was intense beauty we can all experience and identify with. In his pile of self-portraits, there was an urgency to figure himself out. We all struggle with knowing who we are and who we want to become (witness all the thousands of internet quizzes that promise to tell us which Muppet or Middle-Earth race we most closesly resemble); Munch was just really persistent in trying.

That seems a worthwhile goal, though—figuring ourselves out. Whether we paint or write or psychoanalyze ourselves, knowing is better than not knowing ourselves. It’s worth it to take stock of where we are and where we’ve been, so we can determine where we want to go next. And after this closer look at Munch’s work, part of me will wonder at every stage, how would I paint this in to my self-portrait?