Skip to content
My students are in the midst of their third Grail romance this quarter.  They read Thomas Malory’s account (in Middle English!), Chretien de Troyes’s Perceval, and they are now intrepidly trotting through Wolfram von Eschenbach’s Parzival.
They are doing wonderful work. 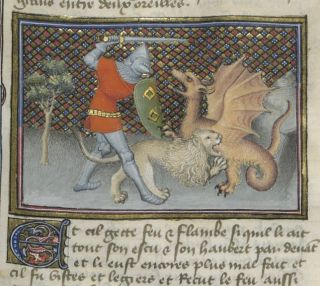 They are comparing the object of the grail, and the procession accompanying it.  They’re interested in the different qualities a grail knight requires in each tradition, and in how the character of Percyvalle, Perceval, Parzival differs and stays identifiable.  And they’re doing admirably with the maze of similar but wacky-in-new-ways names.
They’re trying to get at a core character for Percy.  He’s got to be young, naïve, and not worldly-wise at all.  This innocence seems key to his success in the grail quest.
He still makes plenty of mistakes. His mom tells him to accept love tokens such as rings from fair ladies, so he wrenches the ring off an unwilling maiden.  His next teacher tells him not to ask so many questions, so when the grail castle appears out of nowhere, he witnesses the miracle of the grail, and asking whom it serves would heal the Fisher King and the Wasteland–he stays silent because he’s honoring his teacher.
He seems to apply instruction too literally.  Instruction only gets one so far. Real life is more nuanced than any simple rule can predict.
I think this is why college students like him.  He demonstrates that no matter how well-educated you are, it still matters how you live your life.  You can have bad instructors or great ones, but it matters what you do with your new knowledge. And sometimes the learning curve is pretty gradual: what you have been told takes a while to internalize.
Percy looks on the surface like the “least likely to succeed” in the grail quest, but he lives his way in to the answers (thanks, Rilke!). His experiences shape him, and he fails as often as he wins, but he perseveres.  He apologizes and fixes things when he messes up. He keeps trying to improve himself.
And he achieves the holy grail.
All that remains for us is to do our best, too, then—to own our mistakes and to learn from them, to stand up for people when they need help, to keep going even if we get lost along the way.  It’s not over until the grail castle appears, and the grail castle won’t appear until we’re ready for it.
Innocence, then, isn’t just chastity or virginity. It’s faith that there is order in the universe. We can all achieve that.