I teach the Infernoin my Epics class, after we have read Homer’s Odyssey and Virgil’s Aeneid. It works beautifully, since we first encounter the Greek version of the aftermath of the Trojan War, then the Trojan/Roman; then we get to Dante, and he puts lots of those characters in his afterlife. Odysseus goes to Hades. So does Aeneas. It’s kind of a thing. 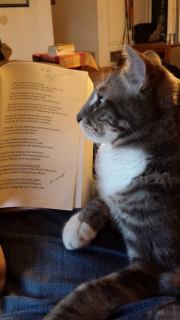 But nothing prepares them, really, for Dante.
The Type Scene of the Underworld Journey (Greek katabasis) is present in most epics, really.  The hero crosses over—literally dies—and brings back otherworldly knowledge to help his people. Gilgamesh, Hercules, Odin, Vainamoinen, Gandalf—so many heroes go and come back, and it’s a dramatic event in their storied lives.
But for Dante it’s the whole work.
For one canto at the beginning, poor Dante is lost, halfway through his life, wandering and trying to get somewhere, but he can’t do it alone. We can all relate to this. And it’s how he hooks us. Then his favorite poet appears, a literary and spiritual guide—Virgil, the Roman author of The Aeneid—and he offers to lead Dante along his edifying journey for as long as he can.
Dante the poet has a poet laureate lead him. Who would be our guide, we wonder? Someone whom we revere; someone who led us by example before they passed on. But before we can get too bogged down in thought, the journey begins.
Dante journeys to Limbo where he sees the spirits of Homer and other classical authors. This is where Virgil has been called from and where he will return when Dante’s tour is over. And we are introduced to Dante’s method and his mania at one stroke. He can put anyone who ever lived—real or literary—in the place he sees fit. It is a hugely ambitious task and a minor miracle that he completed it. So I guess it wasn’t mania—just drive.
The first sinners Dante encounters are the Lustful, and it’s one of my favorite passages in the whole Commedia. I spend a good deal of time on Canto V of the Inferno, unpacking it and reading it carefully with my students. One of Dante’s techniques is to have a soul tell her story (in this case, Francesca da Rimini, who had an affair with her brother-in-law), so he can understand the sin or virtue through a firsthand witness.
Francesca tells of how ill she was treated—trapped in a loveless marriage, she found what she thought was love just a little left of legal. And she first committed adultery at the instigation of a book. She calls the romance of Lancelot and Guinevere a “Galeotto” or go-between. It is after they read together the salacious details of the royal affair that brings down Camelot that Paolo first kisses Francesca.
Dante faints at this moment, and some read it as guilt. He, too, has loved where he should not have.
But I think it’s something else entirely. In an age where books are copied by hand, they can get miscopied very easily.  And in the case of Francesca and Paolo, they didn’t read thoroughly—they stopped before the lovers’ consequences were realized, so were tempted in to the same sin.
As Dante begins to tell of countless sinners and sins, he feels the weight of his responsibility and collapses under it. What if his text inadvertently–through sloppy copying or sloppy reading–leads others to Hell?
And so my students and I start another ambitious task—that of reading judiciously—with the hopes of making it to Paradise.