Skip to content
I had a cousin who was always fascinated with Japanese culture. He spent a lot of time and travel learning everything he could about it, and he worked it in to his life in lots of ways. With a Welsh last name, he didn’t know he had any genetic tie to Japan until he did a spit-in-a-tube DNA kit, which confirmed for him what he had always felt and even hoped: 5-10% East Asian ancestry.
But what about when you love something you have no claim to—just love?
My relationship with the Finnish Kalevala is long and convoluted. And there is, so far as I can tell, not a cell of Finnish in my body. I don’t care.
When I was nine, my aunt gave me a book about eggs for Christmas. It was a weird little book—not really for kids, I don’t think. I have seen it since (and books like it) in gift shops and bookstores over the years. It’s a little, hardbound, dust-jacketed gift book, with lots of folklore, vintage postcards, customs, and legends about eggs from all over the world. If it were bigger, it would be a coffee table book.
I read the whole book, but a few pages I must have read a hundred times over the years. Some had images that worked on my imagination, sticking there, rolling around, popping up when tangentially related topics or stories crossed my path. I grew up wanting to know how to make Ukrainian pysanky (I learned in grad school, as one does). I knew a Slavonian tale about a witch who turned an egg shell in to a boat. And I learned the weird, spell-like word Kalevala.
One two-page spread had an excerpt from the Kalevala, titled CREATION OF HEAVEN AND EARTH, which, in retrospect, seems momentous enough to catch a kid’s attention. The text describes the water mother Ilmatar, who lifts herself out of the sea, becomes a perch for a bird’s nest, and uses the eggs that fall when she twitches her knee as raw material to shape the cosmos: the shell for the dome of heaven and the earth below, the yolk for the sun, the white for the moon, the mottled parts for stars, the black bits for clouds.
There was a picture. I was done. It stayed with me forever.
All it said at the bottom of the page was Kalevala. Neither of my parents had ever heard of it, and there was no Google in 1980. That was all I knew of it for years and years. 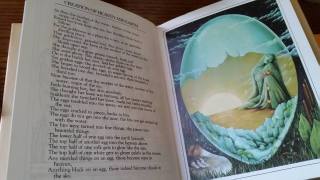 One day in grad school, a friend and I were talking about what it meant to be well-read; we listed all the medieval epics we knew and felt we should know. He mentioned the Kalevala.
A bell chimed in my head, and that image of Ilmatar was right there, as if it had been fifteen minutes, not fifteen years, since I’d thought of it. Clearly I had to follow up.
A professor of Old English recommended the translation I love and teach now, by Eino Friberg, and the Kalevalabecame one of my “Desert Island” books. (Do people still do that—think of which ten books you’d need on a desert island?)
When I had the opportunity to design a course around epics, I included the Kalevala. It rounds any epic discussion nicely, being so lately “gathered,” like the Grimms gathered folktales, with similar nationalistic fervor in the 19th century. Students come in to the class expecting the Odyssey, which they get, but not many think of epics as still being a genre so late as 1870. It feels like a relic, with its shamanism and magic, but the culture it depicts feels fairly modern. It puzzles students and enchants them.
Two years in to my teaching of epics, I stood in line at Subway in Kalamazoo, Michigan at the conference on medieval studies I attend every spring. While chatting up the gal behind me (we all sported the spiffy lanyards with our names and institutions), I learned she was a Finn studying in the states, and she had never met any American who taught the Kalevala. Did I know, she asked, “The Canine Kalevala”?
Of course we’re still friends. The picture book she referred to was hard to find in the United States, but it was available in English. She sent me a copy from Helsinki filled with museum postcards because the illustrator had used famous art depicting scenes from the text, and she wanted me to see the originals.
I shared these “scholarly materials” with my students, and I read that children’s book to my kids any number of times. When my daughter was in second grade and the principal suggested–in light of the “wonderful problem” she presented as too advanced a reader–that I teach her a second language. My daughter chose Finnish. (She lost—I know several other languages well enough to teach a seven-year old, but still not Finnish).  And the Kalevala circle kind of closed.

We have no Finnish ancestry—just a deep love for the characters, the magic, and the world of the Kalevala. That’s enough.