Reading with a cat (or dog!) is one of my favorite images of contentment.

There’s something soothing about the quiet it requires, the warmth of the fuzzy one curled up on a lap or on the floor nearby. It’s an image of comfort, as we imagine the person sitting for a period of time, reading in quiet companionship. And a cat or dog, who can’t interrupt (at least not with speech) evokes a shared silence conducive to reading.

I was lucky enough to spend many hours over Thanksgiving break in such a position. I feel very rested.
I have spent many hours reading with pets over the years, but this weekend was a little different. This weekend we adopted a new cat because her person, my cousin, recently died. This kitty has quite a story.
This kitty found and claimed my cousin’s husband about four and a half years ago. She was alone and needed a home, and they were mourning the recent loss of their previous cat. It was perfect. Brian was retired and lonely while his wife was at work, so the cat became his companion, and in the way these things go, they rescued each other.
But then he got cancer. He was strong and healthy, and he kicked it, but it came back with a vengeance. Through a second round of chemo and some alternative medicines, including trips to far-off retreats and Bucket List vacations, the kitty stayed close, offering what comfort she could. When he died, she was the only other heartbeat in the house, and Carrie was consoled, but still bereft.
A married woman for two thirds of her life, Carrie was lost without her partner. The kitty was a tie to him, but also a reminder of her loss. After a few months, the cat started wandering off for longer and longer periods.
She was on walkabout when the fire came.
When Carrie evacuated, seriously fearing for her house and property, she looked high and low for the cat. The school where she taught third grade closed for over a week. She took refuge at her parents’ house fifteen miles away. She feared for the little gray cat alone in the smoke and ash. Ten days later the kitty returned–haggard, dirty, hungry, lonely. 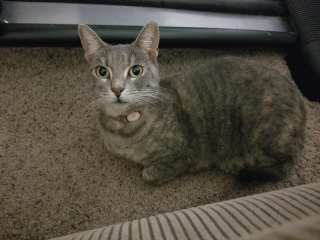 In the months that followed, she stayed home more. She seemed to sleep more. Carrie described her as lazy. The truth was they were both cocooning, trying to decide what shape their life would take moving forward. My cousin made the decision to stay in the house. She resolved to renovate and redecorate and make the house hers–to shape her next phase of life purposefully.
But just as she seemed to be finding her footing, she went to sleep one Saturday night and didn’t wake up.
The cat went rogue.
How much, really, should one little cat have to take? How much can any of us take? She came and went, and the neighbors put food out for her, but she didn’t live there anymore. No one did. Instead, she watched.
In the weeks that followed, the house was emptied. The last ties to her people were boxed and bagged and donated and dumped. What reason could she have for staying there? The food, sure, but nothing else, really–at least not until the sweet voice and soft hand of a sixteen year old girl who scratched her ears and cleaned the cobwebs off her whiskers.
We went to help clean the house last weekend and came home with a new kitty cat. We have pets, and she was dirty and flea-addled, so she needs to be quarantined for a bit while she heals and recovers and adapts. And while she does, we’re taking turns doing our various homework in the back room with her. Because reading with a cat is the best way to read.