Ok, maybe it’s not an extravaganza, but it’s one more than the last two years. Yay!
I haul out all our holiday picture books from the rec room for the month of December every year. When the kids were little, it meant we read holiday picture books almost exclusively for story time. Now that they’re big, it means we all sort of steal one and snuggle down surreptitiously for ten minutes of delight and nostalgia before going back to whatever homework/grading/finals sort of demand we’re facing.
This year I have a mix of old favorites and new treasures—from the traditional 12 Days of Christmas to the Sugar Plum Fairy who happens to have two dads. And then there’s the happy pagan winter tale, slightly updated, of Lucia, the little girl who faces down trolls to bring back the light.
Whether you have someone young to share these with or not, I promise they’re all worth your time.

1. Laurel Long’s “The Twelve Days of Christmas” is far and away the most visually stunning version I have ever seen. I have loved her work for years, especially her fairy tales “The Lady and the Lion” and “The Magic Nesting Doll,” but this one tops everything she’s ever done in my opinion. She includes each of the previous list of element in every page, so you can search for the partridge in every spread and the two turtle doves after the second, and all of them—ALL OF THEM—in the last spread. In the tradition of Graeme Base, this is amazing work. 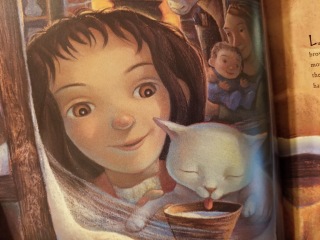 2. “Lucia and the Light” is a rework of the trickster tale where the hero goes to fetch the sun from thieves. In Phyllis Root’s version, illustrated with big-eyed wonder by Mary Grandpré, the hero is a little girl whose name means ‘light,’ and the thieves are giant rock trolls. Lucia is loving and clever and brave, and she has a milk-white cat who is part sidekick, part familiar, and all delightful. My daughter was four when we got this, and she still reads it when I pull it out.
3. Do you know I love bunnies? And Nordic things? Especially gnomes, or as the Swedes call them, tomten? Ulf Stark and Eva Eriksson have a couple books out about “The Yule Tomte and the Little Rabbits” and one for Midsummer as well. The stories are sweet, and the illustrations are precious. They’re aimed at little ones, maybe 3-7 years, but I enjoy them both.
4. This year’s new discovery was “Plum: How the Sugar Plum Fairy Got Her Wings” by Sean Hayes and Scott Icenogle of Will and Grace fame, illustrated by Robin Thompson. This is the little-known backstory of the plucky orphan who becomes the princess of the Land of Sweets, and, when she’s learned to be generous of spirit, she earns her fairy wings. Pretty sweet. 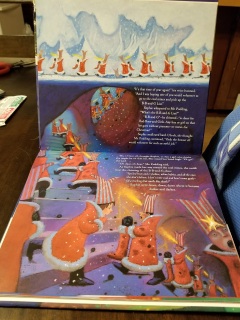 5. Finally, there is “Auntie Claus” by Elise Primavera, another of my favorites from reading with the kids. Auntie Claus is Santa’s sister, and little Sophie sneaks out and stows away to learn the family secrets. This is imaginative and funny, and there’s a rule-spouting elf named Mr. Pudding.  I’m thinking that should be enough. If it’s not, the illustrations are delightful, and once or twice you have to turn the book sideways because the text and illustration demand it, so that’s always a plus.
There you have it: this year’s five picture books for the holidays. I hope you find time to check them out. I’ll happily read them, I mean loan them, to you if you like.
Merry merry, everyone.