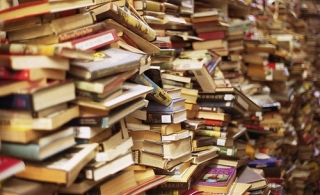 I don’t really have the energy to blog.  But I thought maybe I could share some books that cheer me up.  You know, a top ten list of my Bibliotherapy favorites?  Here’s what I’ve got.
1. The Phantom Tollbooth by Norton Juster.  Kids’ books count, y’all, and this one is an absolute delight. Part allegory, part quest, part punster’s dream, this book never fails to make me laugh.  I found it as an adult, actually, reading it to my kids.  But now I recommend it to everyone I can. Like you!  Enjoy.
2. Julio Cortázar’s Blow-Up and Other Stories.  Even though some of these have a dark edge to them, many of them are so surreal that I find myself able to dissociate their tragedy from mine, which is a step to looking more clinically at my own problems and sorting them out.  I particularly recommend “Axolotl,” “The Night Face-Up,” and “Letter to a Young Lady from Paris.”  You won’t regret it.
3. Fairy Tales.  Most will do, but here I’ll recommend a lovely collection of Baba Yaga tales; nothing makes you feel back on your game like overcoming a witch, over and over again.  Baba Yaga: The Wild Witch of the East in Russian Fairy Tales translated by Sibelan Forrester.
4. Rainer Maria Rilke’s Letters to a Young Poet.  These are searing, beautifully written letters, that I discovered in college when I needed them most.  I still return to them, and they never fail to soothe.
5. Poetry by John Keats or W.B Yeats.  Not just because their names visually rhyme.  Because their speak of beauty like a friend, and to read them is to feel connected to that transcendence.
Ok.  5, not 10.  But it’s a start.  Spenser only wrote half of the Faerie Queene too.
But what would you add?  Do you have a book you recommend to make people feel better? Bibliotherapy is becoming a thing, you know, and we need to be ready with our prescriptions.

Last week was my kids’ spring break, so we hopped in the car and drove to Utah, staying two nights in Bryce Canyon and two at Zion National Park.  My kids are teenagers in the 21stcentury, so by nature sedentary and attached to their computers and cell phones as if to IVs.  They are also my kids and Rob’s, so they have the added bonus of being bookish, imaginative, and mildly introverted (I totally was an introverted kid—I think I’ve grown up to be an ambivert, but I still LOVE my downtime, for anyone snickering), so they resist long adventures and would naturally choose to stay home and “chill” for spring break.  Unfortunately, for their short-term goals, I think it’s important to a) unplug, b) explore the natural world, and c) encounter and begin to understand the rest of the world.  Poor kiddos.

Bryce Canyon awoke my inner rock hound.  It is a geologist’s playground, and we soaked up both breathtaking vistas (literally—it’s roughly 9000 feet elevation, so the air was thin!) and scientific descriptions of the rock formations. “Hoodoo,” for instance, is the glorious term for the pillars of stone that form as the walls of limestone erode from walls to a line of individual spires. Of course we went to the geology talk with a ranger, where we learned about the eons of formation and erosion of the canyon as well as the strata of stone and mixture of minerals that make it so beautiful—pinks and oranges and reds of the stone against the green pine trees, the blue sky, and in April, the white snow.
But the best part for me was when he told us the legends.  He barely hinted, just teasing us with one story, really, that the Navajo told about Coyote luring all the bad guests to a spot where he promised them a banquet, but instead turned them all to stone. Those hoodoos, man. They look like people. 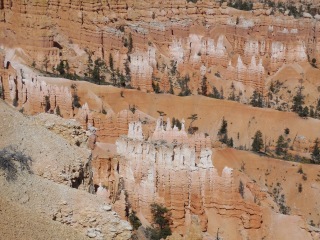 Because they form in rows, they look like lines of people, like families or groups of people interacting.  I usually have one eye on wildlife and find myself repeating “someone lives there” every time we see a cave or an obvious shelter that could be a den, but here I was muttering the whole time, “They look like people,” so I may have been smug when the ranger told us this tale. And I was struck by the common theme of hospitality, remembering my Odyssey, and my Beowulfand all the other tales that teach us about being good guests and hosts, “lest we entertain an angel unawares.” 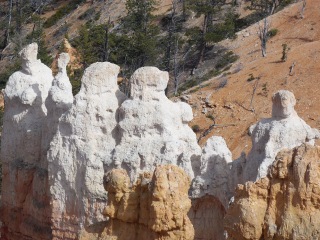 Tolkien said “he sees no stars who does not see them first of living silver made that sudden burst…” (and some more great stuff, in my favorite poem, “Mythopoeia.”)  This was that kind of moment.  I could not see the stones as stones completely until I had my imaginative moment about them.  I know they’re masterpieces of sediment and erosion, but they look like people—people in line, people walking together, people with animals (some were shorter and decidedly canine-looking, or maybe I was getting carried away…).

I had a momentary affinity with those Navajo all those years ago, who looked and saw stories. I wasn’t expecting that.  Beauty, yes.  Nature, yes.  Geology, yes.  But not kinship.  That’s another reason to keep waking the kids up and shoving them in the car and dragging them out in to the beautiful world.

Why do we love Cinderella so?  It’s a rags-to-riches story, so it teaches us that no matter how low we feel, there is always the chance that we can escape our dismal situation and live like a princess or a prince.  (There are Cinder-fella versions as well, naturally.)  There seem to be two strains:  either the inherent nobility of Cinderella is revealed—she turns out to be of noble blood somehow; this is most prevalent among European variants, or she is truly poor in material wealth, but rich in spirit–a diamond in the rough–and her circumstances ultimately rise to match her nature. 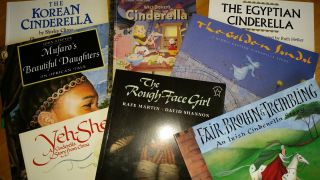 The first kind is now as common as the Disney version in America.  Cinderella’s plight stems in part from being originally noble, a lord’s daughter or higher, who after her mother dies is reduced to servant status in her step-mother’s home.  This is the Grimms’ version, the Disney version, the film version of Ever After.  Some of this Cinderella’s trauma stems from that fall, from the shame of having to act like a servant, when she is not born to it, and her credit stems from the grace with which she adapts to her servitude.
But there are LOTS of versions of Cinderella.  The ones where she starts low have their own appeal, and maybe it lasts longer.  Wishing your nobility will be discovered is an increasingly dated notion.  Rather, the idea that there is a distinction between nobility of spirit and circumstance seems more believable.  It is an old, old notion that nobility is tied to beauty and goodness, and one propagated by the nobility.  Medieval expectations that beautiful souls resided in beautiful bodies operate on the same understanding as the axiom that “might makes right.”  God wouldn’t be so cruel as to put an ugly soul in a beautiful body, any more than he would allow a bad guy to win a duel.
In an age where those expectations are deemed foolish, though, Cinderellas who are poor but virtuous do very well for themselves.  Some come to us from different cultures, without the monarchy baggage that Europeans carry.  I’m thinking of my picture book collection here, which contains “Mufaro’s Beautiful Daughters,” an African tale from Zimbabwe where the girls are poor, but beautiful, and the king tests them in strikingly similar ways to Jesus testing his believers, to see who are virtuous–generous, and gentle in their dealings with others. Or there is the Native American story “The Rough-Face Girl,” about a girl whose face is scarred by sitting too close to the fire, and who wins her future husband by her ability to see his true nature (as a spirit being in the heavens, riding the swaths of Milky Way for sled runners).
In these versions, the kindness of the girl is rewarded, as well as her humility.  Those qualities are rewarded in the gender-bent versions as well.  Helen Ketteman’s “Bubba The Cowboy Prince” may be my favorite of these, where Bubba is just a farm hand who wins the hand of the wealthiest landowner around, Miz Lurleen, with the help of his fairy god-cow.  (I’m not kidding.  It’s glorious–both the fairy god-cow and the fact that the magic glass slipper has been replaced by the manky, mucky boot of a “real cowboy.”)

The upshot is the same, though, in all of these versions.  If you’re kind and humble, you’ll be rewarded by a step up socially and a happy marriage.  Those who try to trick or wheedle their way in to riches will not win.  Nice gals (and guys) do.  Maybe that’s why we keep rewriting Cinderella.  We really want that to be true.

When I was in grad school I took a Dickens seminar, and it was awesome.  Not only did I have incentive to read a bunch of long novels (which I instinctively shy away from), I enjoyed learning about the author in a way one doesn’t get to outside a Major Authors course. There were biographical tidbits throughout the semester, and I left with the feeling that Dickens was someone I would have liked, despite his foibles. The thing I loved the most about him was that he was characterized as a rock star, drawing huge crowds, and doing public readings in the way one thinks of concerts today. He had fans clambering for the next installment of his novels the ways we impatiently wait for our favorite bands’ new releases or anticipated sequels to movies.
It also made me nostalgic for a time I never knew—when an author could have that status.  I’ve been to book readings and signings, and they’re always modest but wonderful moments, perhaps the more wonderful for their intimacy. But I’m never under the illusion that books are as powerful a draw as musicians or movie stars. I’m still not. But I was pretty close last Thursday night.
I took my family to see “An Evening with Neil Gaiman” at the Segerstrom Concert Hall, which seats close to 2000.  It was pretty full. I had no idea what to expect.  Would he read?  Would he chat?  Did he have a performance shtick? Incidentally, it’s hard to sell an outing to teenagers without really knowing what to expect. They’re well-behaved, but they were… reluctant. They both would have stayed home if that had been an option.  But they both had a great time.
It turns out “An Evening” means some reading, some impromptu chatter, and some responding to question cards that audience members filled out before the show.  In all, Gaiman read seven pieces, from a chapter out of his retelling of Norse Myths to a poem he wrote after visiting a Poetry Brothel for his stag party. There was even an encore piece. We clapped; we stood; we sat back down, and he read one more short story. It was utterly delightful.
I left heartened about a world that seems to be super digital, but wherein crowds still form to hear stories. They cheered for him when he mentioned his books and their success, and they cheered when he told a story about his toddler son. They listened, rapt, when he discussed the serious shift in culture from when his novel American Gods was written, and why and how it’s become contentious in an atmosphere of recent travel bans and immigration issues.It was a wonderfully human evening.

Gaiman has a diverse audience, from tweed jackets to tattoos and cargo shorts, and we fit in just fine: another family raising readers, happy to listen in real time to a great story.