Skip to content
Winter in Southern California is a bit of a joke. (And right now, huge swaths are burning as wildfires rage, which is no joke at all.) I saw two convertibles with their tops down today, December 18. It was 70 degrees and gorgeous.

As a person who grew up in the mountains and then lived in the Midwest for eight years, I’ve seen enough snow, frankly, but my kids haven’t. So we put inflatable snowmen in our yard, hang plastic icicles from the eaves, and read picture books about winter.
There’s something kind of wonderful about a season of stillness. In my imagination, if not my zip code, winter involves immobility enforced by nature, as if the whole world is telling us to stop for a bit—rest, chat, drink something warm and comforting, and regroup.
(I get a similar feeling whenever the power goes out. What can I say? I’m an opportunist.)
But winter is lovely. It’s the icing on the cake of the year, and an invitation to reflect on what has happened in the last year, and what we want to happen in the coming year. The Roman god Janus, from whose name we get January, has two faces—one looking back and one looking forward. So I try to pause and honor that transition, even where the flowers bloom year round and people wear flip-flops in December.

And here are a few of my favorite snowy books, that we read to remember.
Winter’s Child, by Angela McAllister, breathtakingly illustrated by Grahame Baker-Smith.   A story of a boy whose grandmother is weakened by the long winter, but who is having so much fun playing in the snow, he wishes it would stay forever—so it does, until he learns about the importance of cycles (Apollo’s creed leaps to mind: Nothing in excess).
Jack Frost by William Joyce. Joyce’s genius, to my mind, lies in his ability to adapt his work for many media. His Guardians of Childhood series includes novels, picture books, and films, and this one tells the back story of Jack Frost, in all his celestial and icy splendor. Light abounds, and in the winter, it sparkles like magic.
Santa Claus by Mauri Kunnas, the Finnish author who weaves so much culture and history in to his children’s books.  This is a picture of the title page, not the cover, because I wanted the Aurora, but his books are full of detail and visual jokes. This is Santa’s back story and sort of a Behind-the-Scenes look at the whole Yule season. And yes, this is the same Mauri Kunnas who gave us the spectacular Canine Kalevala, which I regard as one of the greatest literary  achievements of the 20th century. 😊
Merry Christmas, Matty Mouse, by Nancy Walker-Guye, illustrated by Nora Hilb. This might be the sweetest Christmas story you read this year. It’s about a mouse who bakes cookies at school to give to his mommy, but he gives most of them to hungry friends on the way home. A sweet lesson about generosity and bounty, we read it every year.  And I cry every year. In a good way.
That’s it for this year. Unless I’m compelled by an unpredicted force to write on Christmas Day, I’m taking next week off, and I’ll see you in 2018. May the turning of the year bring light and luck and love to you all.
It is a mistake to think we don’t need to remember anything, that we can look everything up.
It’s true the Internet is changing the way we think and learn, but the shift to teaching skills, not content, I think, is misguided.  In English departments (particularly literature programs) we have been told that the way to make our programs relevant and marketable is to teach skills that students can apply in other contexts, rather than worrying that everyone has read the same set of “classics.”

(Before we start arguing, notice I put classics in scare quotes. And understand that I don’t have a hit list or a canon of literature in mind, really. This is an argument for content, but not necessarily for specific content.)
I do think literature teaches important, transferrable skills. Close reading, understanding the context in which a work was written, analytical writing—all of these are good things and all are very useful across the job market.
But it matters, too, perhaps more than we’ve thought recently, as information changes so rapidly that people don’t bother remembering things, that we fill our heads with cool stories and beautiful works. It turns out that having material in our heads is still important.
Memorizing passages is useful. Reading widely and having lots of stories to consider and connect to one another is vital not just to looking well-read (the appeal of which should not be underestimated among English majors). It matters because we use the material, the stories and experiences we have in our memories, to help us move forward.
There has been work on this in multiple areas recently. In an article on how kids’ reading comprehension increases in step when they have exposure to more subjects and experiences (demonstrating that kids’ comprehension skills improve when they have some knowledge of the subject matter they’re reading), Daniel T. Willingham shows that kids who have broader knowledge develop reading skills faster. The more you know, the better you learn.
Another facet of this is the impact of a rich, full head on creativity. When people aren’t
encouraged to memorize anything because literally every subject can be quickly researched on the Internet, we are making it harder to be creative. Art Markman argues in his book Smart Thinking, that the more knowledge you have, the more material in your mind, the more you can mix things up and create something new. Those with less stuff in their heads have less to play with.
When I teach literature I ask my students to think about what other texts (books, movies, video games, whatever) the text at hand reminds them of. We try to build connections between stories and scenes and characters, so that the next time we encounter a Reluctant Hero, we recognize her. It stands to reason that the more stories we have in our heads, the more access points we have to understanding a new text.
But this has wide application, according to these other studies. The upshot seems to be that the more we read, the better we read; the more we learn, the better we learn; and the more we know, the more we can create.
So go on. Build yourself a beautiful constellation of interconnected stories, images, and facts.
Be your own Google.
And here are links to articles I mentioned.  On reading comprehension: https://www.nytimes.com/2017/11/25/opinion/sunday/how-to-get-your-mind-to-read.html?smid=fb-share
On creativity and its connection to memory:  https://www.psychologytoday.com/blog/ulterior-motives/201510/creativity-is-memory
I am an Advent junkie. 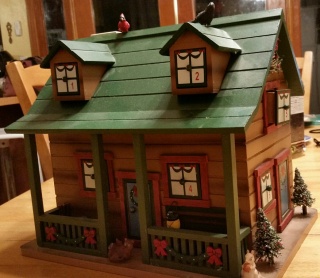 I like lots of things about the idea of Advent as it is expressed today. I love the countdown to something wonderful—whether it be the celebration of the birth of Christ, the return of the sun, or the warm fellowship of family and friends. And I seriously think we should count have countdowns more often.

But let’s start with Advent. One of the immediate benefits of this custom is the extension of a shortish holiday in to a long, glorious season. With Christmas, you really just get the two days, and sometimes day and a half, of Christmas Eve and Christmas Day. Kwanzaa celebrates seven days; Hanukkah gives you nine nights. Those few, intrepid traditionalists who celebrate the 12 days from Christmas to the Feast of the Epiphany get—you guessed it—twelve. But Advent lets you double that—24 little celebrations.
And you get those lovely calendars that help you mark your progress. All you have to do is wake up the next day to earn another Advent treat.  Depending on the calendar you use, that treat can be something as small as moving a felt bird from pocket to pocket, to opening doors on a cabin that produce another forest critter for decorations, to drawing out a paper with a different celebratory activity or a holiday story to read, to receiving little presents—candies or toys or tea or whisky.  It’s all good.

In my house, we celebrate a lot. And I plead guilty to both the decorating type and the treat type of Advent calendars. The ritual moment of moving that silly little bird is still lovely.
When my kids were little, we did the activities and the story time.  I stocked little tins with slips of paper that told us to make paper chains and to read Herschel and the Hanukkah Goblins. We had Lego and Playmobil calendars a couple years. We did candy treats the last several years, and I’ve paid for access to electronic Advent calendars with games and interactive scenes. 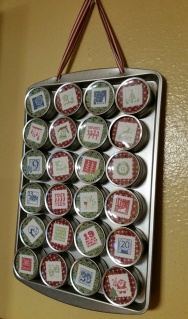 But we always do something.
There is something powerful about knowing you have a treat coming that turns a normal month in to a time to anticipate and enjoy. Something nearly meditative that brings one in to the moment for a short time each day, as we pause to pull out another critter or munch our treat, to notice where we are in the month and to take a step forward purposefully.
I’m not saying we should have countdowns every month. (I can hear my dad saying if we did it all the time, it wouldn’t be special.) But I am grateful for a tradition that draws out good cheer over weeks instead of hours, that encourages delight in small things, and that forces us to pause and notice our progress.